If you have diabetes, what’s your risk of developing diabetic retinopathy? 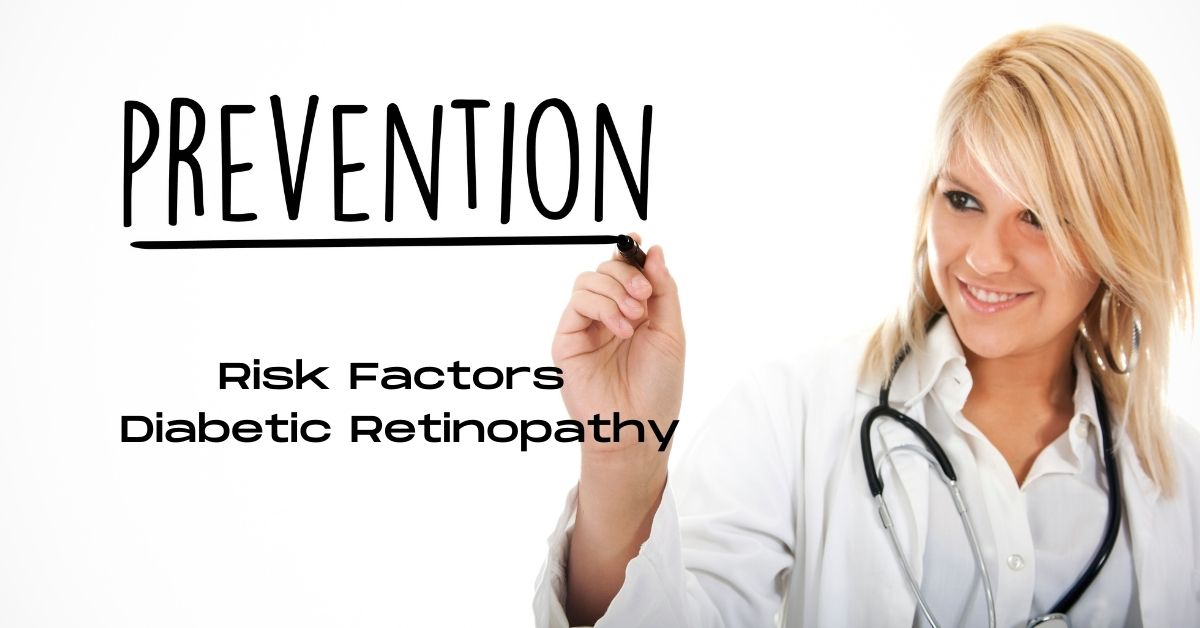 Diabetic retinopathy is the most common diabetic eye disease and a leading cause of blindness in American adults.

Women who develop gestational diabetes are at high risk for developing diabetic retinopathy. If you are diabetic and are pregnant, have a comprehensive dilated eye exam as soon as possible. Ask your doctor if you will need additional eye exams during your pregnancy.

Retinal detachment. Diabetic retinopathy causes an abnormal growth of blood vessels which can also produce scar tissue. The scar tissue can pull the retina away from the back of the eye. This may cause spots that float in your vision, flashes of light, or a loss of vision.

Glaucoma. The abnormal blood vessels may grow in the front part of your eye and interfere with the normal flow of fluid out of the eye and cause excessive eye pressure. Over time this pressure can damage the optic nerve that carries images from your eyes to your brain.

Vitreous hemorrhage. The abnormal blood vessels can also bleed into the clear, jelly-like substance that fills the center of your eye. If there is only a small amount of bleeding you will see a few dark spots (floaters). If the bleeding is severe it can fill the vitreous and block your vision.

Control your blood sugar. You can help control your blood sugar by making healthy food choices and getting at least 150 minutes of moderate exercise each week. That amount of exercise could be accomplished by taking a brisk 30-minute walk 5 times a week. Make sure you take any diabetes medication as directed.

Get an A1c test. The A1c test will show you and your doctor your average blood sugar level for a two-to-three-month period. This monitoring will help you learn if your diabetes has been under good control and help you and your doctor make beneficial changes to your diet or medications if needed.

Keep your blood pressure and cholesterol under control. Eating a healthy diet, regular exercise and losing weight can help. You may also need some medications.

Get a comprehensive dilated eye exam at least once a year. Regularly monitoring the health of your eyes allows your eye doctor to start treatment before in the early stage of diabetic retinopathy any complications develop.

Don’t smoke. Smoking increases your risk of developing diabetic retinopathy and other complications of diabetes. 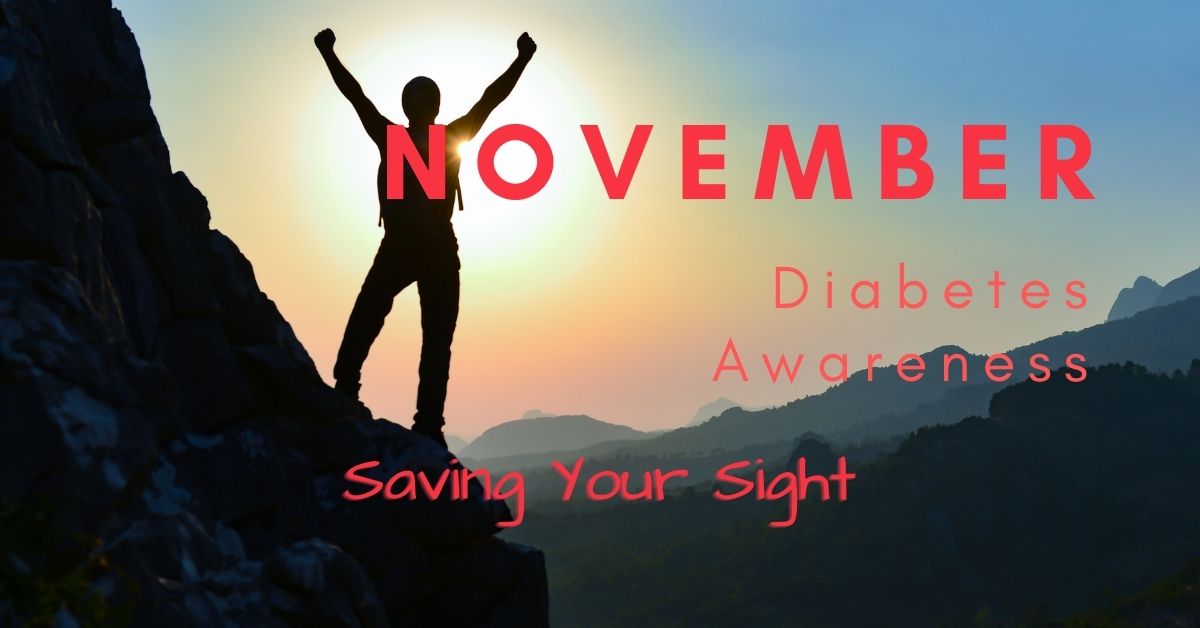 If you have diabetes, take a few minutes to learn about diabetic retinopathy and how you can take steps to help keep your eyes healthy.

Diabetic retinopathy is the most common cause of vision impairment and blindness among working-age adults in the U.S. It occurs when high blood glucose levels damage the blood vessels at the back of the eye causing them to become weak and leaky and damage the retina.

NPDR is the early stage of diabetic retinopathy. At this stage, high glucose levels have weakened the blood vessels and, in time, may cause bulges in the weakened vessels (microaneurysms) that may leak fluid into the retina and the leakage may swell the macula or some blood vessels may begin to close. So this is an ongoing disease cycle that can be slowed or stopped if caught early.

PDR is the more advanced stage of diabetic retinopathy. The NPDR has weakened the blood vessels or closed them, so new blood vessels have grown in an attempt to supply oxygen to the retina, but these new vessels are fragile, and they leak and damage the retina.

Anyone with type 1 or type 2 diabetes, or women who have gestational diabetes during pregnancy, can develop diabetic retinopathy. The risk increases when blood sugar, blood pressure, and cholesterol levels are not under control.

Symptoms that indicate diabetic retinopathy has progressed are:

The best treatment happens before you develop symptoms. Strict control of your blood sugar will significantly reduce your risk of vision loss from diabetic retinopathy. If you have high blood pressure and kidney problems, make sure those are kept under control too.

Injections in the eye of anti-VEGF medication can stop the growth of new blood vessels. VEGF stands for vascular endothelial growth factor, and it is a signal protein your body produces that stimulates new blood vessel formation, but the new vessels are weak and leaking vessels that damage your eyes, and anti-VEGF injections will stop that abnormal blood vessel growth.

Laser surgery and vitrectomy are other treatments for advanced PDR. But the most important thing to remember if you have diabetes, is that control of your blood sugar and early diagnosis and treatment of diabetic retinopathy are the best protections against vision loss. 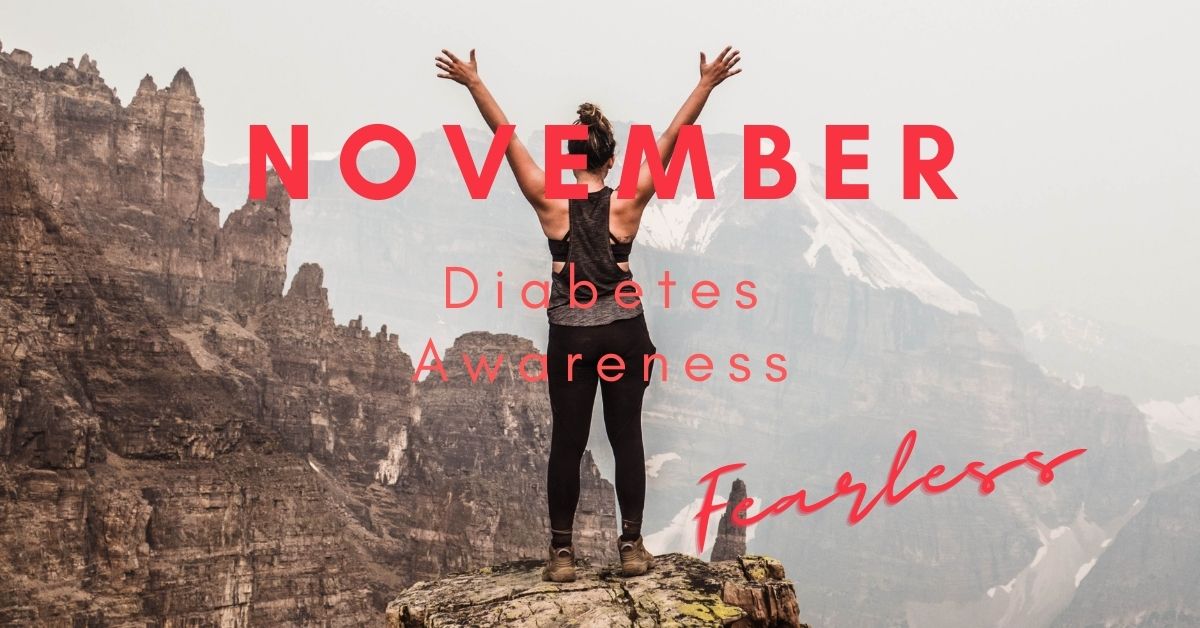 November is Diabetes Awareness Month and World Diabetes Day is November 14, the birthday of the man credited with the discovery of insulin—Frederick Banting.

Diabetes is a chronic, metabolic disease which can lead, over time, to serious damage to the heart, blood vessels, eyes, kidneys, and nerves. Diabetes awareness aims to improve understanding of this disease within your family and your community.

An estimated 34.3 million Americans, 10.5%, have diabetes according to the CDC’s National Diabetes Statistics Report, 2020 and 88 million adults, approximately 1 in 3, have prediabetes. New diagnosed cases for both type 1 and type 2 diabetes are on the rise for U.S. youths.

Diabetic retinopathy, the disease that affects the eyes, is a leading cause of blindness, yet vision loss can be prevented.

Fredrick Banting was a Canadian orthopedic surgeon who was fascinated with the published research into the role of the pancreas in diabetes. In 1901 it was discovered that the pancreas produces insulin from a collection of cells known as the Islets of Langerhans, which are  irregularly shaped patches of endocrine tissue located within the pancreas.

The problem Banting wanted to solve was extracting the insulin from the pancreas. Many attempts had been made, but all of them had failed.

Banting had an idea but had no research experience and needed help. He convinced the head of the University of Toronto to give him a laboratory and a research assistant.  Banting and his research assistant, Charles Best, started work on May 17, 1921. James Collip, an experienced Canadian biochemist, was asked to join Banting and Best in December 1921 to purify their insulin extract.

On January 23, 1922, a 14-year-old boy, Lenard Thompson, became the first person to receive an insulin injection as treatment for diabetes. By 1923 insulin was widely available and a diagnosis of diabetes was no longer an immediate death sentence.

Insulin from cattle and pigs was used for many years, but it could cause allergic reactions in some patients. In 1978 recombinant DNA technology made it possible to insert a human gene into a common bacterium so it will produce the protein (insulin) encoded by the human gene. The insulin is extracted from the bacteria and purified.

Today and a Look Ahead

Diabetes is now a manageable disease and the technology for managing it is constantly evolving.  The American Diabetes Association (ADA) has a Device Technology section on its website that describes and explains continuous glucose monitoring devices, glucose meters, and insulin pumps.

On the ADA website you also can find a Diabetes Education Program. These programs are located throughout the U.S. and the educators in the programs work with diabetics to give them the information, skills, and resources they need to successfully manage their diabetes. Medicare and most insurance plans cover these diabetes education programs.

On September 28, 2016 the FDA approved the first artificial pancreas device system. It works by inserting a very tiny sensor under the skin, usually on the stomach or arm, that measures the glucose fluid in the fluid between cells every few minutes and sends this information to an insulin pump attached to the body that, when needed, delivers the right amount of insulin. In this way insulin is released throughout the day as a natural pancreas would.

Islet cell transplants are in the experimental phase and being done in 17 centers around the country that are participating in islet cell research programs. The challenges the researcher face are methods for collecting enough islet cells for a transplant and preventing rejection of the transplant.

What Can You Do?

Improve your own diabetes awareness.

Living with diabetes is now easier than ever before. Share this information with your friends and family to raise their level of knowledge and understanding of this disease.

No matter what, every patient with diabetes needs to have their eyes examined yearly. Severe vision loss and blindness can be prevented, but only with timely and regular examination.